In 2022, Leave Those Kids Alone released their debut all-original album titled “groundwork” featuring 7 songs written by the band. In their hometown(s) of Windsor, Ontario / Detroit, Michigan, Leave Those Kids Alone is a go-to act for family-friendly festivals, summer concerts, public events, corporate engagements, and even weddings! The band has performed across Ontario, Michigan and the midwest.

Having performed over 250 shows, the band is no stranger to performing live in front of 5,000+ people! Their online videos of classic rock favourites have reached every corner of the world and earned millions of views on Facebook, Instagram and YouTube.

In 2015, 11-year-old Timothy Hole and 7-year-old Alex Bonadonna met at the Canadian Conservatory of Music, in Windsor, Ontario. They began rehearsing and performing classic rock hits with school director, Peter Palazzolo and Alex’s father, John-Paul Bonadonna. Three years later, with recital performances and growing local and online reputation, Timothy and Alex were joined by Addisyn Bonadonna, and the newly named band “Leave Those Kids Alone” began performing to audiences in their hometown. In 2021, Timothy, Alex and Addisyn were joined by Luca Angelini and Louis Diab to complete the all-kid lineup.

From its very beginning, the band has maintained a tireless performance, rehearsal and online video production schedule to reach audiences in-person and around the world. In less than a year after forming, they wrote the original material for “groundwork”. 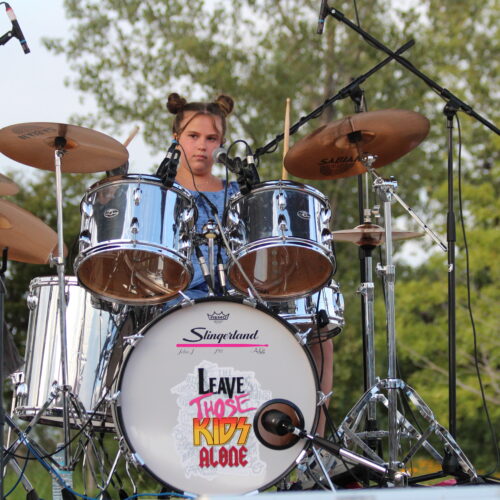 FAVOURITE BAND(S): The Beatles, Walk Off The Earth, Fleetwood Mac

WHAT I LOVE MOST ABOUT BEING IN LTKA: Being with all of my friends all of the time and I like to smash my cymbals when performing.

FAVOURITE MEMORY: When we play great gigs and the crowd goes wild.

FUNNY MOMENTS: When Alex trips all the time.

INTERESTS OUTSIDE OF BAND: Shopping, doing makeup QUIRKS: i) I always need to say someone’s name before I can talk to them, for example… DAD, DADDDD, DAAAAAADD “WHAT IS IT JUST TELL ME” ii) I always need to bring water with me wherever I go or else I will get very VERY thirsty and make someone buy me one.

CAREER IF WE DON’T TURN OUT TO BE WORLD RENOWNED STARS (BUT WE WILL): Something in fashion.

PIECE OF GEAR I WISH I OWNED: I’m good with what I have now thanks to some incredible people.

FAVOURITE BAND(S): Fleetwood Mac, The Beatles, STYX
FAVOURITE MUSICIAN(S): Peter Frampton and Christine McVie
MUSICAL INSPIRATION: Peter Frampton
WHAT I LOVE MOST ABOUT BEING IN LTKA: Performing and writing songs.
FAVOURITE MEMORY: When I had a headache and had to take a swig of water from a solo cup and the crowd exploded thinking I was having a drink! Which also explains the answer to the next question.
FAVOURITE GIG: 1st visit to Leisure Lake.
INTERESTS OUTSIDE OF BAND: Formula 1
FAVOURITE FOOD(S): Crab, Mac and Cheese, Steak
QUIRKS: All doors and blinds must be shut prior to sleep. Some lights must remain on. Foods shall be sniffed prior to consuming. Socks should be avoided at all costs.
PIECE OF GEAR I WISH I OWNED: Gibson Les Paul Axcess Custom in Bengal Burst finish, preferably the 2019 model.
DREAM CAREER IF WE DON’T TURN OUT TO BE WORLD RENOWNED STARS (BUT WE WILL): It’s this or nothing. 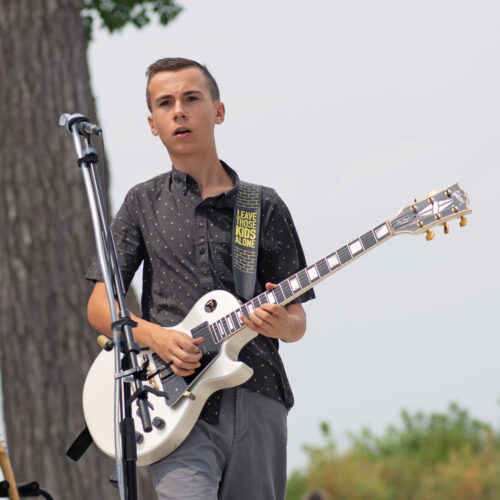 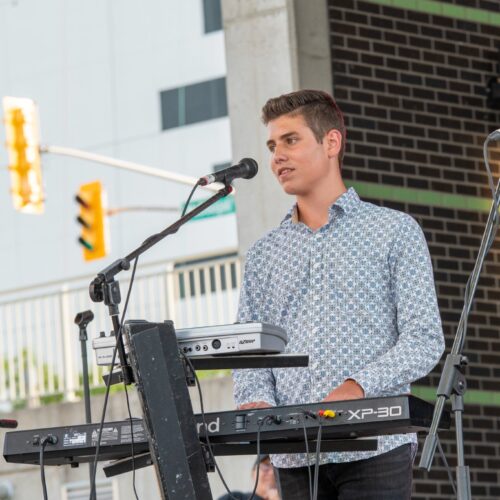 FAVOURITE FOOD(S): Lamb, steak, chili, mashed potatoes
QUIRKS: I say “oh boy!” too much, I do not get jokes, and when I try to joke, there’s always a ‘tough crowd’, can be dramatic at times.
PIECE OF GEAR I WISH I OWNED: Hammond XK-3 Organ, YAMAHA MOXF8
DREAM CAREER IF WE DON’T TURN OUT TO BE WORLD RENOWNED STARS (BUT WE WILL): Completing post secondary, and continuing to achieve a masters in aerospace engineering or getting my MBA, to then own a competitive music store to Guitar Center. (Band will get free access but may need a start up loan) LOL

FAVOURITE ARTIST(S): Queen
FAVOURITE MUSICIAN: Paul McCartney
FAVOURITE SONG: Bohemian Rhapsody
MUSICAL INSPIRATION: My late Nonno
WHAT I LOVE MOST ABOUT BEING IN LTKA: I love playing in front of a new audience all the time with my best friends
FAVOURITE MEMORY: Pool party at Diab’s
FUNNY MOMENTS: When Addi dropped her stick and I had to stop playing and go pick it up for her
FAVOURITE GIG: Bank Theatre opening for Jody Raffoul
INTERESTS OUTSIDE OF BAND: Soccer, hockey, hunting and fishing
FAVOURITE FOOD: Gnocchi
PIECE OF GEAR I WISH I OWNED: Thunderbird Bass Guitar
DREAM CAREER IF WE DON’T TURN OUT TO BE WORLD RENOWNED STARS (BUT WE WILL): Blacksmith 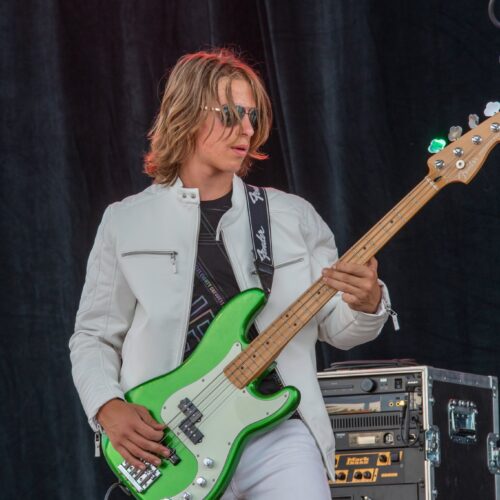 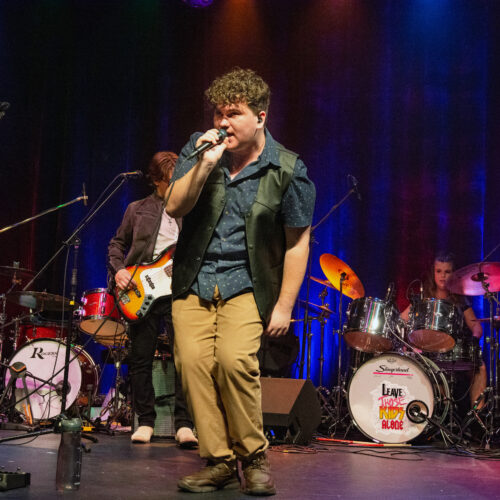 FAVOURITE ARTIST(S): Journey, Bon Jovi and many more.
FAVOURITE MEMORY: I’ve been pulled up to the front row at two concerts at Pine Knob and receiving Tommy Shaw’s ‘blown away!’ comment on our ‘Renegade’ video.

FAVOURITE SONG TO PERFORM: Carry On My Wayward Son
WHAT I LOVE MOST ABOUT BEING IN LTKA: Audience reactions! No one ever realizes we’re a kids band. The looks on people’s faces is always flattering.

FAVOURITE GIG: Leisure Lake! We packed the place to the point where it was hard to walk around.

FUNNY MOMENTS: I always whisper weird things in the other guys ears when we perform, it ranges from “skittles…” to singing Backstreet Boys songs.
INTERESTS OUTSIDE OF THE BAND: Hockey, soccer, video games.
FAVOURITE FOOD: Pizza
QUIRKS: I dislike ketchup, like… a lot! BBQ sauce too! My musical tastes were shaped by watching Midnight Special videos on YouTube.
FAVOURITE MUSICIANS: Neil Schon and Steve Perry of Journey.

DREAM CAREER IF WE DON’T TURN OUT TO BE WORLD RENOWNED STARS (BUT WE WILL): Policing